A molecular-level study is going to be launched to pinpoint a mysterious odor that has fouled Milpitas neighborhoods for years. Despite past studies, it has been difficult to pinpoint the source or sources. Full story here.

The city of Milpitas will go through a year long odor study from Nov 2019 to Oct 2020. It is vital that you report any odor to the various agencies. Read more about this odor study on here. Instructions on how to report odor is on our website also.

Here is the city’s announcement on fb:

The City’s study will collaborate with the Bay Area Air Quality Management District’s (BAAQMD) South Bay Odor Attribution Study, which is occurring at generally the same time. The City’s study focuses on assessing and quantifying odors potentially impacting the community while the BAAQMD study will focus on odors from targeted facilities in and around Milpitas.

Below is the written response from BAAQMD & LEA regarding the recent increase of odor:

BAAQMD : “We have also been investigating what source(s) may be contributing to the odor spike the last few evenings. Our Inspector was in Milpitas in the evenings this week and observed some trailers at the MRF that were overfilled and contributing to localized odors at the facility. Jay took pictures of the untarped trailers and I can ask him to forward the pictures he took. Regarding the CASP, I will need to check in with our staff to see if there were compliance concerns and get back to you. They also conducted patrols at ZWED and the wastewaster treatment facility but didn’t observe odors from those facilities. “

LEA : “The mild odor we could detect we thought was most likely compost and it was in the afternoon (approximately 2:30 – 3:30 PM). We made this determination based on what direction the prevailing winds were coming from (NW) and where we could detect the odor (SE Milpitas) which is downwind from the compost operations. “

1. BAAQMD will award the contract for South Bay Odor Study at its July 31st board meeting. The study is projected to cost $300-500k. Reps from odor generating facilities were present and supportive of the study.

2. City of Milpitas has hired a consultant to implement odor monitors.

4. LEA received many complaints on its website. Inspector detected Newby Island MRF and landfill odor. CalRecycle-LEA issued a violation to Newby Island for not covering the working landfill at night.

5. Newby Island MRF redesign is in progress with construction to be completed by 2021.

Official meeting minutes can be found on
http://sbosg.info/archives/

The city of Milpitas stinks—and it’s determined to find out why. Milpitas wants to find out which of several nearby waste facilities, like this one, might be behind the town’s signature odor.

Source: Milpitas studying why it stinks so bad – Curbed SF 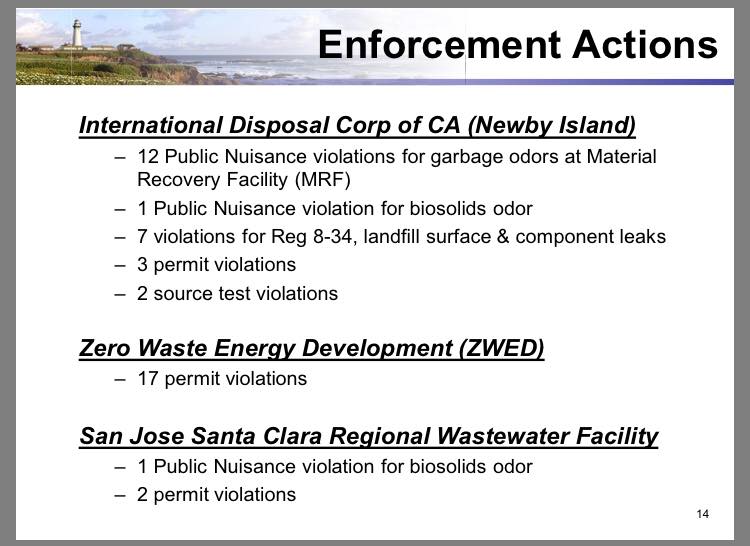